What is the cruciate ligament?
Like people, dog's have cruciate ligaments.  These are ligaments in the knee that prevent the thigh and skin bone from moving forward and backward independently of one another.  The one that causes particular problems in the dog is the cranial cruciate ligament.  This ligament spans from the back of the femur (thigh bone) to the front of the tibia (skin bone). 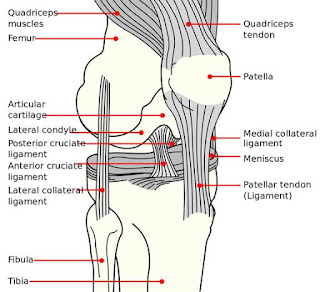 Unlike with people where most cruciate injuries occur during activity (sports in particular), dogs tend to tear their ligament due to chronic, degeneration of the ligament which leads to weakness.  When dogs do tear their ligament, an owner could notice signs ranging from a subtle lameness to holding the hind-limb up completely.

How is a cruciate tear diagnosed?
In most cases, a cruciate tear can be diagnosed with a thorough orthopedic exam of the knee.  In particular, a veterinarian is looking for either the "drawer" sign or tibial thrust.


If a pet is particularly anxious, he/she may need to be sedated to fully evaluate the knee.  X-rays of the knee may also be performed, which can show swelling of the knee consistent with injury.  It is rare to perform an MRI to confirm a cruciate tear as many tears can be diagnosed with just the physical exam.

Exploration:
Exploration of the knee joint can be done is one of two ways.  The first, less invasive way to explore the knee is through arthroscopy (camera in the knee).  Small incisions are made into the knee joint to allow for a camera and instruments to be inserted.  Once inside, the ligaments and meniscus can be evaluated.  If the cruciate ligament is torn, the remnants of the ligament are typically removed, as they can be a source of inflammation.  The meniscus (cartilage in the knee) is also evaluated because many times a meniscal tear is also found with cruciate tears.  If torn, that section of the menincus may be removed or a release of the meniscus is performed.  The benefits of arthroscopy are that it is less invasive than tradition arthrotomy (opening the knee joint completely) and the camera allows for magnification of the ligaments.  The cons are that not everyone has the equipment to perform this and it adds cost to the procedure.

The other way to explore the knee is to open the joint with a scapel, which is called arthrotomy.  Prior to arthroscopy cameras being available, this was the traditional way to evaluate the knee.  Since a larger incision is needed, it is more invasive.  Similar to athroscopy, the ligaments are evaluated, remnants are removed, and the meniscus is evaluated.  The con of this procedure is it is more invasive, however, no special equipment is needed for it.

Stabilization:
Once the joint has been explored and the ligament is confirmed as torn, the knee must then be stabilized.  Unlike with people where the cruciate ligament is reconstructed using a tendon, in dogs veterinarians stabilize the knee in a different way.  The two most common procedures are either the lateral stabilization technique or the TPLO surgery.  There is a lot of information about these procedures at other websites, but this one from Colorado State does a good job of explaining things.

In some situations surgery may not be an option for a pet, whether it be due to financial restrictions or due to other health problems with the pet.  In these situations, the knee will start to develop arthritis which then can be managed in other ways.